Yadokargo (ヤドカルゴ, Yadokarugo) is the boss of the Opening Stage in Mega Man 8, a crab robot that protects Dr. Wily's secret base, and accumulated moss on its shell due to its long period of dormancy. It pinches at Mega Man, leaps, and shoots bombs. Its weak point is its brain, which is protected by its shell. When hit by a charge shot or one Mega Ball, its brain is exposed. Yadokargo reappears when revisiting the stage, but it can be easily be taken out with Flash Bomb or Tornado Hold, and can be destroyed instantly with Astro Crush (regardless of protection from its shell).

Yadokargo appears in the first chapter from the Rockman 8 manga. 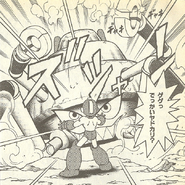 Yadokargo in the Rockman 8 manga.
Add a photo to this gallery

Retrieved from "https://megaman.fandom.com/wiki/Yadokargo?oldid=346959"
Community content is available under CC-BY-SA unless otherwise noted.