MMKB
Register
Don't have an account?
Sign In
Advertisement
in: Articles in need of expansion, WWW, Mega Man Battle Network characters,
and 3 more

Yahoot, known as Maha Jarama (マハ・ジャラマ, Maha Jarama) in Japan, is the operator of MagicMan.EXE and a former WWW member. In the game, Yahoot was Wily's right hand man.

In the game, Yahoot spends most of the time by Wily's side, assisting him with his plans and relaying orders to the other WWW members. When Lan entered WWW's base, he and MagicMan guarded the door leading to the Life Virus. They were initially defeated by MegaMan, but Wily gives Yahoot a piece of the Life Virus's code, which he uses to upgrade MagicMan. MegaMan is no match for MagicMan's newly acquired strength, and is almost deleted in a single attack. Chaud and ProtoMan intervene, deleting MagicMan as he's charging another attack to finish off MegaMan. Yahoot is not seen again after this point, and presumably fled.

Yahoot is one of the participants from the Battle Chip GP.

In the anime, Yahoot is a famous yoga teacher and world renowned curry chef, and is still Wily’s right hand man. Later on in the series, he begins to care less and less about the revival of the WWW and more about his curry business, and becomes an ally and friend to Lan and MegaMan. 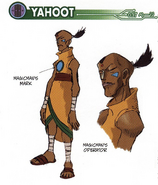