MMKB
Register
Don't have an account?
Sign In
Advertisement
in: Articles in need of cleanup, Females, Humans,
and 6 more

Yai Ayano, known as Yaito Ayanokōji (綾小路 やいと, Ayanokōji Yaito) in Japan, is a character in the MegaMan NT Warrior anime series. She is the operator of Glide.EXE and a new student to DenTech Elementary who becomes friends with Lan Hikari, Maylu Sakurai, Dex Ogreon, and Tory Froid. The genius daughter of the CEO of AyanoTech, Yai skipped from the 3rd grade to the 5th grade and is very wealthy, owning several mansions and vehicles. She becomes a romantic rival for Chaud Blaze’s affections with Anetta.

After the first season of the anime, Yai moves to Kingland and only appears sporadically throughout Axess and Stream before rejoining the main cast in Beast.

Yai has blonde hair tied with two long braided ponytails and brown eyes. She wears a red dress with pink highlights and a gold button on top, she also wears pink socks with red highlights and red shoes.

Yai is a spoiled and entitled wealthy young girl with very little patience and understanding, and is often annoyed by the calm and levelheaded reasoning of her Navi, Glide. She is highly intelligent, having skipped to the 5th grade from the 3rd grade to join Lan and the others. Later when she moves to Kingland, she visited sporadically through ludicrous means, such as inviting Lan to a hot spring, only for the hot springs to turn into a rocket and blast him and the others into space.

Despite initially being disgusted by Chaud, she develops affection for him when he helps her reach the top of an underwater hotel during the N1 Grand Prix when the two were trapped in the elevator together, and eventually grows to have romantic feelings for him, which she battles Anetta over with, much to Chaud’s annoyance and indifference.

A running gag in the anime is that her forehead is large and so bright that she can use it to blind people temporarily. She uses it to her advantage (humorously at one point naming it her "Yai Flash" special attack) and has even called it her "charm point". Chaud has a tendency to make fun of her for it, and once got blinded himself, looking at her private jet in the sky while at a meeting.

Through all of her personality, Yai cares deeply for her friends and likes to spend time with them and fights alongside them when in need, though she mostly calls them for favors.

She often eats high class foods and eats at high classes restaurants, and her favorite drink is strawberry milk.

She debuts in episode 3.

She appears in episode 30.

She appears in episode 47.

She appears in episode 48.

In episode 5, she returns to Akihara Elementary after completing her schooling in Kingland.

She appears in episode 7.

She appears in episode 24.

Maylu and Yai dressed as Aki in episode 27.

Yai in her swimsuit from the anime. 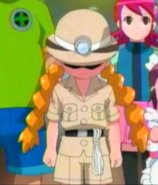