MMKB
Register
Don't have an account?
Sign In
Advertisement
in: Mega Man 11 bosses, Fortress bosses, Robots made by Dr. Wily,
and 2 more

Just like the previous Yellow Devils, the Yellow Devil MK-III will split itself into multiple body segments and try to hit Mega Man from one side of the arena to the other before reassembling itself, and its weak point is the eye. When assembled, its eye will appear and shoot a single energy projectile. After losing half of its energy, the Yellow Devil MK-III may also slowly rear its head as it slowly opens its eye, before firing three slow projectiles one after the other.

The Yellow Devil MK-III has a new attack method that involves using the Speed Gear. Upon activation, the Yellow Devil divides into nine miniature versions, one of them having the eye always exposed. The miniatures fall in a corner three at a time and will jump several times on their way to the other corner until they reach it, then run back to the starting point and jump away. Afterwards all miniatures will quickly fall one at a time, covering the whole area except for the opposite corner from where the first one appeared. The last miniature to fall has the core, giving the player a small chance to attack it before it escapes. After this, the Yellow Devil MK-III reassembles offscreen and drops into the room fully formed.

The Yellow Devil MK-III is weak to Chain Blast. Due to the time the default Chain Blast takes to detonate, it is recommended to only use it with the Power Gear when attacking the Devil in its full form. To attack the miniature with the core once the Devil splits up, use Speed Gear and wait for the right time to stick a Chain Blast onto it.

In the Superhero difficulty, the Yellow Devil MK-III gets a series of changes. Its split attack is much faster, along with the miniature Yellow Devils, which perform their falling attack twice in a row, changing directions.

The newest model of the Yellow Devil, a heinous device designed with the express purpose of defeating Mega Man. Wily has equipped this model with a Speed Gear to ensure there's no possible way Mega Man can dodge its tricky split attacks.

Though the Yellow Devil's massive body seems like it might be a better fit for a Power Gear, even Wily has to struggle with budget issues from time to time, so he decided to limit the upgrade to the classic split attack and trust that a speed boost to this old favorite would be enough to do the job. 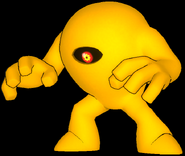 Yellow Devil MK-III in the gallery
Community content is available under CC-BY-SA unless otherwise noted.
Advertisement