Yeti (イエティ, Ieti) is an UMA character from Mega Man Star Force 2 based on the mythological creature Yeti, which is also known as "Abominable Snowman". 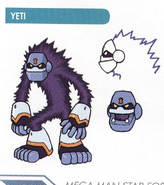 Yeti in the anime
Add a photo to this gallery
Retrieved from "https://megaman.fandom.com/wiki/Yeti?oldid=292303"
Community content is available under CC-BY-SA unless otherwise noted.