Yeti Blizzard (イエティ・ブリザード, Ieti Burizādo) is a character from the Mega Man Star Force series. He is the EM Wave Change between the human Rich Dotcom and the Mu UMA Yeti.

Yeti is given to Rich Dotcom by Dark Phantom in order to wreak havoc on Grizzly Peak. The two EM Wave Change and start a blizzard on the ski slopes by tampering with the weather control system, trapping Bud Bison and Amy Gelande in the process. Mega Man saves the two, and later defeats Yeti Blizzard.

Yeti is fought again on the Mu continent when a copy of Yeti EM Wave Changes with a Murian in order to prevent Mega Man from proceeding deeper into the city. Though there were many more Yetis from the Mu continent in existence, all of them disappeared when Mu was destroyed.

Yeti Blizzard is first seen fighting with Dark Phantom over the Sword of Berserk. When Omega-Xis accidentally swallows the OOPArt, they leave, seeing no point in continuing the fight.

When Geo travels to the Loch Mess due to a rumor that an OOPArt is present, Rich Dotcom follows him there. While Plesio Surf attacks the nearby settlement to frighten people away from what he considers his area, Rich Dotcom enters the underwater shrine, steals the Dinosaur Fossil, and escapes with it.

After Hyde claims the Shinobi Shuriken, there is a three-way struggle between Yeti Blizzard, Dark Phantom, and Mega Man for each other's OOPArt. Dark Phantom then leaves the battle halfway, being late for an art class, whilst Yeti Blizzard dukes it out with Mega Man. When Hyde takes Hope Stelar hostage, Mega Man heads to the park, but with Yeti hanging on to him, refusing to let go until he claims Mega Man's OOPArt.

Eventually, Yeti Blizzard's OOPArt is forcibly extracted by Hollow. Rich Dotcom and Hyde then follow Dr. Vega to the continent of Mu, having been promised eternal life. They assist with the ritual in reviving Le Mu, and when Le Mu begins to regain its former strength, they escape from the continent, realizing the imminent destruction about to occur. Rich Dotcom is currently at large.

Yeti Blizzard Battle Cards are obtained from Yeti Blizzard. The Avalanche card is only obtained in the Zerker version.

These cards can also be used with Blank Cards. 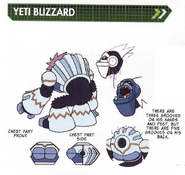 Concept art of Yeti Blizzard.
Add a photo to this gallery

Retrieved from "https://megaman.fandom.com/wiki/Yeti_Blizzard?oldid=331640"
Community content is available under CC-BY-SA unless otherwise noted.