Yudon (ユードーン, Yūdōn) is a large stationary enemy from Mega Man 5. It sends two guided missiles after the player. Its head is its weak point, and as it launches missiles, it raises its arms to block shots. If its missiles are not shot down, it will refrain from raising its arms until one is. Yudon appears in the stages of Napalm Man (as well as in Mega Man for the Game Gear) and Charge Man.

Amount of shots/hits from Special Weapons it takes to destroy a Yudon. 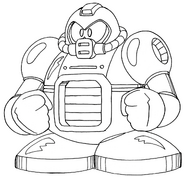 Retrieved from "https://megaman.fandom.com/wiki/Yudon?oldid=341795"
Community content is available under CC-BY-SA unless otherwise noted.