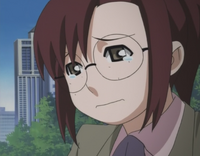 Yui Hazuki (葉月ユイ, Hazuki Yui) was the momentary operator of Asteroid StoneMan.EXE. She appeared in episode 6 of Rockman.EXE Stream.

She was voiced by Nanae Katō.

Retrieved from "https://megaman.fandom.com/wiki/Yui_Hazuki?oldid=299155"
Community content is available under CC-BY-SA unless otherwise noted.