Yuika is a member of the WWW. She first appears in Central Town advertising a dance festival at Central Area 3. Once there, she uses CircusMan to drain the energy out of the NetNavis there. She catches one Cybeast and runs after the NetPolice arrive.

Yuika later takes part in a successful mission to capture MegaMan, after which she, Vic, and Prosecutor Ito break away from the WWW and form their own group; however, during the split, they lose MegaMan and have to retreat. They show up again to kidnap Iris and are successful. Once they have Iris, Baryl tries to rescue her, but the ex-WWW members beat him up and nearly kill him before Joe Mach arrives and drives them away.

Yuika and the others appear again during the final battle against Lan. Their NetNavis are deleted, but as they are about to attack Lan themselves, Chaud, Mayl, Dex, Yai, Mick, and Tab show up. Yuika, Ito, and Vic attempt escape by jumping off the pavilion and are knocked unconscious due to the height of the fall. They are later arrested for their crimes.

She will call Lan if MegaMan does an impression of her using the Humor program.

Yuika and Captain Blackbeard live in Beyondard and firstly work for the Gregar army under the orders of Zoanoroid DarkMan. When Zoano DarkMan is defeated by MegaMan, they make a run for it. They then work for the Beyondard Lord Wily, who hires them in order to get his hands on Trill, which he does. When things look awry, they try to make a run for it on board a flying machine, but Dark Scythe sets a bomb inside of the craft, sending them off-course right into the Fossa Ambience that was open and lead to Earth.

Following the ending of Beast, Yuika and Captain Blackbeard crash-land in what they consider to be Beyondard (note, characters on both sides consider the other parallel world Beyondard).

After attempting to cause chaos in the world not of their own, they meet the Dr. Wily of Beyondard (yet again, not the one they are used to). When Dr. Wily refuses to aid their cause of revenge against Lan and MegaMan, they steal some Chips which they believe to be Synchro Chips (in fact, they are Reverse Synchro Chips), by burying Dr. Wily and Dusk with a pile of cans while the two were sharing a drink. Although, this was not their initial intention; they thought that, upon seeing that Wily collects cans, if they collect a big load of them, they might earn his help. They use the Reverse Synchro Chips to cross fuse and end up in Internet City. They are saved by the combined work of MegaMan, ShadowMan, and Dr. Wily. Afterwards, Yuika and Blackbeard are sentenced to work at an aquarium by Dr. Wily in order to "learn what the rules of this world are." They are not seen again.

Yuika makes a brief appearance in volume 12 of the manga, where she orders CircusMan to capture MegaMan. She is the only World Three member from Battle Network 6 (besides Baryl) to appear in the manga. 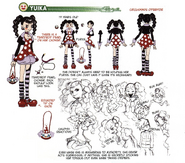 Concept art of C.F. CircusMan - Yuika.
Add a photo to this gallery
Retrieved from "https://megaman.fandom.com/wiki/Yuika?oldid=298109"
Community content is available under CC-BY-SA unless otherwise noted.