Similar to No Heroes Allowed: No Puzzles Either!, the player uses a pickaxe to dig blocks to combine three or more of the same monster to summon it to attack the heroes invading the dungeon of the Overlord. The player must defeat the hero before he reaches the Overlord, otherwise he will be captured. Heroes that survive are captured and can be forced to mine for items or monsters.

In 2018, the game held the Mega Man collaboration event "Rockman Invasion! Awakening of the Evil Robo Army!" (ロックマン襲来！目覚めよ悪のロボ軍団！, "Rockman Invasion! Awakening of the Evil Robo Army!") from August 30 to September 13. Several enemies from the Mega Man series appeared as monsters in the gacha during the event. The player could also fight against Mega Man in Block Man's stage, Fuse Man's stage, and the first Wily Stage stage from Mega Man 2, each with their own difficulty. Besides capturing Mega Man, which can be used to dig for Guts Man, the player gains small and big Life Recovery points that unlock rewards as they are accumulated, including three types of E Cans to enhance Mega Man monsters and tickets for the event gacha.

On September 6 new stages and a new gacha became available, with Proto Man appearing alongside new versions of Mega Man in Crash Man's stage, Flash Man's stage, and the fifth Wily Stage from Mega Man 2. Heroes obtained in these stages can dig for Yellow Devil. The new gacha replaces Block Man and Splash Woman with Bass and Quick Man.

The heroes from the event are Mega Man (N rarity) and Proto Man (SSR), and variations of Mega Man with Spark Shock (R), Tornado Blow (SR), Pharaoh Shot (SSR), Metal Blade (R), and Block Dropper (SR). The Dig Skills from the R, SR, and SSR units gives a chance to obtain specific monsters when the heroes are sent to dig in the mine. Power Arm (パワーアーム, Power Arm) has a chance to obtain Guts Man, and Liquid Metal Detection (液体金属探知, Liquid Metal Detection) can grant Yellow Devil.

Overlord and his daughter

After taking rewards in the Rockman events, the Overlord and his daughter will say something for specific rewards.

Wily Stage
Add a photo to this gallery 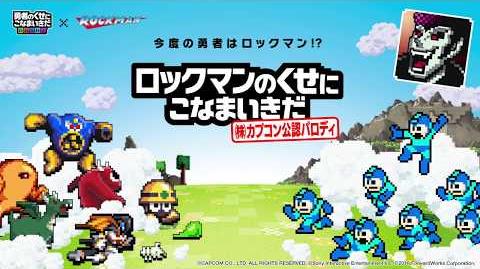 Retrieved from "https://megaman.fandom.com/wiki/Yuusha_no_Kuse_ni_Konamaiki_da_DASH!?oldid=315694"
Community content is available under CC-BY-SA unless otherwise noted.