Rockman X (manga)
Rockman Zero (manga)
Rockman X Mega Mission
Z-Saber (ゼットセイバー, Zetto Seibā), also written as Z Saber and Z-Sabre,[1] is Zero's main weapon in the Mega Man X and Mega Man Zero series. It is a powerful saber with a green (blue in some artworks from the Mega Man X series) energy blade. Zero receives the weapon in Mega Man X2 after he was remodeled by the X-Hunters, and has appeared in every chronological game since. Zero performs most of his techniques with the Z-Saber, his most recurring techniques being a rising slash, a downward stab, a dashing thrust or slash, and a rolling slash.

In Mega Man X2 and Mega Man X3, this weapon is known as the Beam Saber (ビームサーベル, Bīmu Sāberu, sometimes Beam Sabre). In Mega Man X2, Zero releases a shockwave from the Beam Saber after using two Charge Shots, and he uses a dashing slash. In Mega Man X3, Zero uses the Beam Saber when he fully charges his attack, hitting nearby enemies directly. When not used, Zero stores the deactivated Z-Saber hilt in a special sheath-like element located on his back (where in canon artwork barring his ambidextrous sprites, Zero has the sheath behind his left shoulder), although in Mega Man X7 and Mega Man X8, he keeps it out and activated as long as it is equipped (in the case of Mega Man X8, Zero has the sheath over his right shoulder in gameplay).

The Z-Saber can be used on the ground and in mid-air and can perform combo attacks; however, the normal slashes (and the combos) force Zero to stand still. His default combo in Mega Man X4 to X5 is normally a downward slash-to-outward slash done via his following arm then a forward-leaning downward two-handed chop that does three hits (while in Mega Man Xtreme and Mega Man Xtreme 2 he inflicts a one-handed inward slash slightly upward instead). The crouching attack is an inward sweeping slash while the midair slash is an outward swing angled a bit downward (which changes its animation slightly when done as he lands). This in X6 changes to an inward cut, downward-outward cut then a two-handed launching-lift slash to the background (which inflicts 3 hits; both the first and third inputs are akin to his Xtreme games' neutral combo finisher); the crouching slash changes into an outward sweeping-slash, and the midair slash is a midair version of his original downward 3-hit slash (which resembles an altered version of it when performed as he lands).

Similar to the Special Weapons, Zero can use the Z-Saber to execute techniques that he learned and adapted from enemy Mavericks. The techniques obtained from defeated bosses usually are assigned to different elements, such as fire, ice, and lightning, and those attacks are executed by fulfilling certain button combinations while being in a certain situation (for example, being in mid-air).

Before Zero's destruction at the end of Mega Man X5, the Z-Saber had a rather fluid-formed blade, less like a saber in the actual sense due to its irregular energy flow. After his resurrection in Mega Man X6, Zero's new Z-Saber has a more solid energy blade. Zero Nightmare also uses a fluid blade.

In Mega Man X: Command Mission, Zero can use several types of swords besides the Z-Saber, all of which are Combat type weapons that hit a single target. The Z-Saber is Zero's initial weapon, a beam saber that he uses to attack with a Double Slash combo. As the game progresses, Zero has access to better versions of the weapon, the Z Saber+, Z Saber++, and Z Saber+++.

X can also use the Beam Saber, usually as easter eggs or in certain circumstances. In Mega Man X3, in order to obtain it, Zero must pass through the one boss door that he can enter in the entire game. It's found on the second stage of Dr. Doppler's fortress, and is the first door in the stage. It leads to the sub-boss Mosquitus. Defeating the sub-boss with Zero will cause him to be severely injured by its explosion. Zero will then pass the Beam Saber to X before teleporting out to Dr. Cain's lab for repairs, becoming unavailable afterwards. Of course, losing Zero results in the "bad" ending. To use the Beam Saber, X must fully charge his buster beyond the pink charge level into the fourth green charge level, where he will then draw it from his back and fires off a slashing arc of green energy, where upon impact, the target is swarmed with cutting blows. The attack does optimal damage and is considered the game's ultimate weapon.

The fluid-shaped Z-Saber is found by X in the end of Mega Man X5 and used by him in Mega Man X6 by pressing the Special Weapon button without one equipped. The Z-Saber's purpose in X6 allows X to destroy obstacles and enemies that cannot be done otherwise with the X Buster, or inflict damage in a more tactical manner. As not being as experienced with the Z-Saber as Zero, X has a rather slow recovery time from slashing as he uses Zero's original third-input slash on the ground (while still using his original horizontal slash in midair). His armors in X6 are also more geared towards utilizing the Z-Saber, with the Blade Armor allowing him to adapt it into his buster and empower it, while the Shadow Armor has him use it with ninja like tactics due to its attack set.

It's unknown what happened to the original Z-Saber after Zero reappeared following the destruction of the Zero Nightmare.

While not seen being used by X again in the main games, the Z-Saber is used by X's Blade Armor version in Bouken Dig Dig 2, and in Ultimate Marvel vs. Capcom 3 Zero has a skin that models him after X, making him look like X with Zero's moveset, including the Z-Saber.

Zero appeared with the Z-Saber in most of his appearances in other games.

In Tatsunoko vs. Capcom and Marvel vs. Capcom 3, Zero uses the fluid Z-Saber version from Mega Man X2 to X5. He also reuses the whole standard saber slash attack set as follows from X4-to-X5: default neutral combo is his standing light, medium and heavy respectively, crouching medium is his crouching slash and jumping medium is his midair slash; however these animations are all altered perspective-wise due to Zero unsheathing the Z-Saber from his leading shoulder instead of his following shoulder like in the 2D games (while canonically and in artworks as aforementioned, behind his left shoulder is where he holsters the saber when inactive).

A Long Sword with the appearance of the Z-Saber appeared as an event weapon in Monster Hunter Explore. It is able to release Genmu Zero waves.

Z-Saber appeared as an event weapon in Elemental Story.

Z-Saber appeared as an Action Card in TEPPEN.

The Z Saber is one of the Ten Shining Weapons, and like Zero, its whereabouts had been unknown until the Cyber-elf X gave it to Zero in the beginning of the first Mega Man Zero game. After Mega Man Zero (despite being in all concept and promotional art for the first game), the Z Saber has been redesigned and reconfigured along with Zero himself, now possessing a triangle-shaped blade. Furthermore, the Z Saber received a few more upgrades. Unlike in the X series, the Z Saber now can be used while moving (however, no combos can be performed while in motion) and can even be charged for a smash-like attack due to the X-Buster technology embedded into the saber. The Z Saber is also customizable, allowing the Resistance member Cerveau to make it the basis of the rest of Zero's arsenal in the series by adjusting the saber's safety valve, allowing Zero to freely compress and shape the blade according to his needs.[2] The exceptions are the Buster Shot (which is still combined with the Z Saber as source for its energy ammunition) and the Zero Knuckle. Some Mega Man Zero series sources, such as Recoil Rod's artwork, indicate that in this series Zero actually uses at least two Z Sabers. According to concept arts, the Z Saber(s) is/are stored within the holsters located on Zero's hips. The Z Saber can be equipped with different chips for element-based charge attacks.

The weapon's most interesting characteristic is the sheer amount of force it can dole out to enemies; it is able to easily slice through 300 mm of reinforced steel in a single stroke. The Z Saber is also unique in the fact that it apparently doesn't require an energy source to operate. In Mega Man Zero 2, Zero spends around a year far away from any energy source and the Z Saber is still in full operating condition; though, knowing that Zero has an internal reactor, it is possible that the saber can be recharged by drawing energy from Zero himself.

In the first two games, Zero has to "relearn" his skill with the Z Saber, upgrading its attack power and moveset by frequently using it against enemies, thus leveling it up. In the first game, Zero can also learn two rolling slash attacks by defeating several enemies with the Z Saber while jumping or dashing. The rolling slashes aren't learned in Mega Man Zero 2, but they are still available by using the Active Form. In the second game, the skill level will not increase during the first mission in the Sand Wilderness, only after Zero is repaired in the New Resistance Base.

The skill level up system isn't present in Mega Man Zero 3 and Mega Man Zero 4, but Zero begins the games capable of using the three slash combo and charge the Z Saber. He can also use other enhancements by using Hacker Cyber-elves in Zero 3 and Body Chips in Zero 4.

In the first game it is a toy sword, its description from the Japanese version saying that it is from an anime called "Rockman Zero". It can be obtained by winning the Beast Hunter mini-game from Kattelox Island's TV station with a high rank.

In the second game the mayor from Pokte Village says that the Zetsabre is a legendary shining sword that was used by a hero who saved the village long ago and was handed down in her family over the years. Mega Man Volnutt can either buy it for two million Zenny or gain it as a prize for answering all 100 questions from her quiz correctly.

The Mega Man Battle Network series has two Z-Sabers that appeared as Battle Chips, one from the Zero virus and the other being Zero's Z Saber (misnamed as Z Saver in the games) from the Mega Man Zero series.

In the Archie Comics, the Z-Saber is given a light nod in issue 40 of the Mega Man comic's "Dawn of X" storyline, when Zero uses Sigma's saber to help take down the Wily Walker. Sigma comments that Zero should consider getting a saber of his own some day. Zero eventually obtained his own saber and uses it during Worlds Unite.

Zero battling Colonel with the Z-Saber

X with the Z-Saber in Mega Man X6 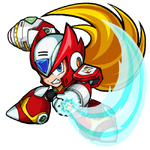 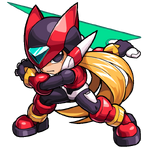 A trophy of Zero with his Z-Saber in Super Smash Bros. for Wii U 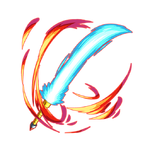 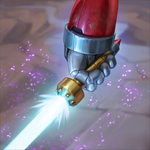 Blast Hornet with Zero's saber in the Rockman X3 manga

X with Zero's saber in the manga