MMKB
Register
Don't have an account?
Sign In
Advertisement
in: Battle Network stubs, Articles in need of expansion, Battle Chips,
and 2 more

Z-Saber is the name of two Battle Chips from the Mega Man Battle Network series.

Z-Saber is the Battle Chip of the weapon of the same name used by the Zero virus in Mega Man Network Transmission.

When activated, the user performs three attacks, using a long 1x2 slash, a wide 3x1 slash, and a 1x3-3x1 "|-" slash, each causing 100 damage. If the player starts the attack by holding the A button and press left+B in the third slash, the NetNavi will use a fourth attack, a wide sonic boom.

The Z-Saber Battle Chip from the Rockman Zero series is used by Enzan in Rockman.EXE Beast, being used both by his NetNavi Blues and their Cross Fusion. Copyroid (episode) NetNavi Remodeling Scheme 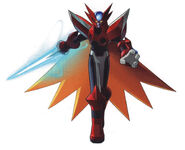 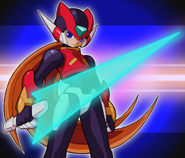 C.F. Blues with the Z Saber

C.F. Blues with the Z Saber