In the first two games, Zero uses the Zero Buster, a chargeable arm cannon embedded in Zero's arm(s) that is more powerful than the X-Buster. In Mega Man X, it is able to damage Vile's Ride Armor while the X-Buster couldn't. If X does not obtain the Arm Parts from the First Armor, before defeating Vile in Sigma's hideout, Zero will give his Arm Parts to X, although it has the same effect as the Arm Parts from the capsule. In the PSP Remake, Mega Man Maverick Hunter X, the Zero Buster was shown to fire red buster shots in both normal and charged versions. After receiving the Arm Parts from Zero, X's charge shot will be the same one as Zero's, which is stronger than the normal Arm Parts. The Zero Buster can also be overloaded which can cause massive damage to Ride Armor, although it can prove fatal for the one who overloaded it, as evidenced by how Zero sacrificed himself in both Mega Man X and Maverick Hunter X.

When Zero is revived in Mega Man X2, the design of his buster changed alongside him. Zero uses his buster in his fight against X if they battle. When X is at an intermediate distance, Zero fires a small charged shot. If X is at a further distance, Zero will fire two large charged shots one after the other (one from each arm) followed by a shockwave from his beam saber. This triple attack is used by Zero to destroy his copy if X recovers all of Zero's body parts from the X-Hunters, and again to attempt to attack Sigma. He also uses this attack in the post credits scene to form the "Presented by: Capcom" message.

In Mega Man X3, the Zero Buster can be charged to use the Hyper Zero Blaster (ハイパーゼロブラスター, Haipā Zero Burasutā) attack. Zero can fire two charged shots, one after the other (one from each arm); however, they do not combine. The sprites of the busters are the same, but in published pictures of Zero in X2 and X3 they are different. The reason why the buster designs are different in X2 and X3 is unknown, but it is suggested that the shape could change due to the power charge mode since the X2 design reappears in X5 and the X3 design reappears in X6. The Zero Buster has four charge levels:

When Zero became a fully playable character in Mega Man X4, his buster was completely removed due to game balancing; however, in Mega Man X5 and onwards, the Zero Buster, now called Z-Buster, is able to be used.

The Z-Buster is introduced in Mega Man X5; in this game it is only usable if the game was started with Zero, since he loses it in his battle against Sigma Head if starting with X. Even losing the buster in the intro stage, he can still shoot energy balls collected in Volt Kraken stage and fire charged shots when being a boss. It may be for the game balance and player choice. The usage of this buster was rather unfavorable since its power was stripped down drastically (in comparison to Zero Buster in the previous games). It can only be used on the ground and Zero is unable to move while firing it, because he has to "charge" the attack. During his boss battle, he uses a larger shot with energy spiraling around it.

Awakened Zero uses a special attack from his Z-Buster during his fight as a boss known as Shingetsurin (『真月輪』, "True Moon Ring"), replacing his standard pair of Lv. 2 shots.  Zero shoots two blue ring-like projectiles that home in on X wherever he's moving and after a moment, they will home in on X one more time to try and hit him again.

When Zero was resurrected in Mega Man X6, the Z-Buster received new abilities. The firing frequency of the Z-Buster was vastly increased (yet still bound to ground-only usage) and its power was increased as well, making it rather useful against most enemies and bosses. Aesthetically, the firing stance is not as upright as in the prior game.

Zero Nightmare uses a buster shot barrage attack from his Z-Buster called Buster Attack during his fight as a boss when his health is low, and uses the same firing stance in as seen in X5 (specifically the same Z-Buster sprite from the X5 prototype).

After Mega Man X6, the Z-Buster was never used again in the series.

The Zero Buster is also used by Zero in Tatsunoko vs. Capcom: Ultimate All-Stars and Marvel vs. Capcom 3 in both of his throw attacks (forward throw involves him jamming his firing buster at his foe, while his back throw is a nod to his Tensou Shot/Transfer Shot in SNK vs. Capcom: SVC Chaos where he dashes past and fires at his opponent's back).

However, he also uses it for his Hyper Zero Blaster move carried over from X3, which unlike for his throw animations, indicates that it is a technique done with the Buster rather than the Buster attack itself.

Like the Mega Buster itself used by the two Mega Men in the past Vs. Capcom games, Zero can walk around while charging the HZB and it can also be fired in midair (where he does so at a downward angle), though Zero as per usual will drop the charge if he gets hit. It is very useful in terms of extending combos, to cancel into other special attacks and to put pressure to the opponent from afar as a zoning tool. The projectile speed becomes faster when it is fully charged and can pierce through the opponent for 3 hits.

The buster charge takes around 3 and a half seconds to fully charge in Tatsunoko vs. Capcom, while in Marvel vs. Capcom 3 it has been buffed to exactly 3 seconds, and the shot is slightly bigger. In the Ultimate version of Marvel vs. Capcom 3, Zero can now charge his Hyper Zero Blaster during the start of a round, though the knockdown properties of the attack have been nerfed. Also, the firing part of the attack at max charge can now be cancelled into from his special moves, increasing both Zero's zoning and combo/conversion potential in one.

It also should be noted that in both TvC and MvC3, both of Zero's aforementioned throws that directly interact with his Z-Buster cause him to lose-and-restart his HZB charge when performed, save for in MvCI where he can even charge it up during any of his throw animations.

However, in Marvel vs. Capcom: Infinite, Zero can now cancel his specials into the firing animation of a Lv. 1 and 2 shot akin to the cancel added in UMvC3, and the charge time is now shortened to 2 and a half seconds. A Lv. 3 shot however, can also instead allow him to expend the said charge perform new moves as followups:

In the Archie Mega Man comic, Zero uses his Zero Buster during the "Dawn of X" story line. In the later "Worlds Unite" story, Zero uses the Z-Buster alongside his Z-Saber. 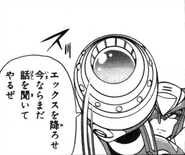 Zero disabling his Buster when facing Blast Hornet in the manga.

Zero's Buster malfunctioning in the manga. 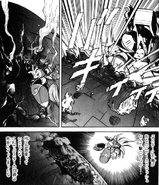 Zero's Buster destroyed in the manga.

Zero's Buster in the opening of Mega Man X3.

Zero's Buster in the ending of Mega Man X3.

Zero's using his Buster during the fight against Vile.

Zero battling Bit with his Z-Buster.

Zero defending X from Sigma with his buster.

Zero with his buster in the ending of Mega Man X5. Zero Buster prepared for Rekkouha in Marvel vs. Capcom 3. 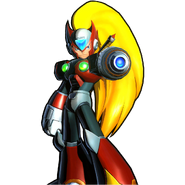 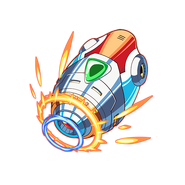