Zombie Cafe (ゾンビカフェ, Zonbi Kafe) is a free to play game from Beeline Interactive (a subsidiary from Capcom) released in 2011 for the Apple iOS. It can be downloaded for free at the app store, but charges real money for additional in-app content. The game's last update was in October 20 (American version) / November (Japanese version) 2016, after the release of Otomon Drop: Monster Hunter Stories. The Japanese version's service ended in September 2019, being no longer available for download and losing online functions.[1] The game can be played offline.

It's hard to find good help, thus a café owner partnered with an evil corporation to use zombies as free labor to build a café empire. Customers can be infected to become eternal zombie slaves by using a toxin, giving the chef an advantage over the neighboring "human" cafés. Like a normal café, players prepare food with all kinds of recipes, direct the (zombie) workers, decorate the place, manage supplies, and earn money to improve the café. However, if the zombies work too hard they'll get tired and try to eat customers. If the competition gets too fierce, the chef can always direct the zombies to attack a neighboring café and steal their secret recipes and money.

In 2014, from December 26 to December 31, an event was held in the Japanese version of the game where Mega Man content was available during its duration, players being able to acquire Mega Man characters and recipes.[2]

Some Mega Man characters later returned briefly alongside other Capcom characters as rare gacha prizes in August 2015, September 2015 and January 1, 2016.[3]

On June 15, 2016, the Rockman decorations from previous events (excluding the "boss shutter pillar" from the 2014 event) became available in the shop for a limited time.[6] Note: Keeping the game on version 1.6.7 will allow one to have these decorations always available, but at the cost of being unable to participate on events and special gacha until it is updated.

Most Mega Man characters became available again in a Capcom event from August 2016, which also included Axl as a gacha character, OVER-1 as an event character, and three new recipes themed after them and Zero.[7]

List of Mega Man characters in Zombie Cafe, with their stats at level 0. 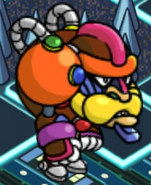 Spark Mandrill
Add a photo to this gallery

Retrieved from "https://megaman.fandom.com/wiki/Zombie_Cafe?oldid=305730"
Community content is available under CC-BY-SA unless otherwise noted.